Emu Oil
After the bird is processed, the fat is refined into a safe and stable oil at a licensed refinery. The oil, certified by the American Emu Association (AEA), can then be used in cosmetic and health products.   Due to its soothing properties and emollient benefits, it is used topically on skin conditions from head to toe.

Emu Meat
More than just a “three letter flightless bird from Australia” in a crossword puzzle, the Emu provides a dark red meat that is 98% fat-free, is high in iron and protein, and contains zinc and Vitamin B12. A University of Wisconsin study, released in June, 2000, revealed emu meat to be more healthful in 15 out of 20 nutrients, when compared with other lean meats.  It can be prepared as a steak (similar to a filet mignon) or as a hamburger, or used in any recipe that calls for lean ground beef. Because there is no fat in the meat, it is essential not to overcook it!

Emu Eggs
Emu Eggs are dark green. The female lays an egg every 3 to 5 days. As she lays eggs, the male will cover them with leaves, grass, straw, or whatever is available until he is ready to start incubating them. When there are at least 9 eggs, the male will start sitting on the nest. The male will incubate the eggs for 50 to 54 days. He will not eat or drink during this time. When the eggs hatch, the first thing he will do is eat the eggshell. This helps to get his system going, and also hides evidence of the chicks from predators. The chicks will stay with the rooster until they are grown. On an Emu ranch, the eggs are usually collected by the rancher and placed in an incubator, where temperature and humidity are carefully monitored. 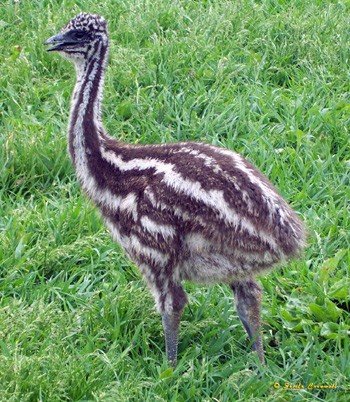 Emu chicks are grey with brown, black and tan stripes and a maze pattern on their heads. As they get older, they lose their stripes. By the time they are 3 months old, they will be almost black in color. At 6 months, they will be a lighter color with striated feathers, much more like the adults.

Emu Feathers
Visually enticing, emu feathers work well in dried floral arrangements.  Emu feathers are unique because both the primary and secondary feathers are the same length. Each feather has two shafts, with barbs, so widely spaced that they do not interlock to form a firm vane as in most birds; instead they form a loose, hair-like body covering. There are four types of Emu feathers: the short, black neck feathers; the downy-white fluffy chest feathers; the silvery-brown, black-tipped back feathers; and the long, bristly tail feathers, which may be as long as 26 inches. The feathers are used in the automotive and electronic industries as feather dusters, and by fishermen for tying flies.

Emu Leather
The leather is soft and supple with an intriguing pattern resulting from the removal of the feathers. The leather is usable wherever a soft, piece-work display is desired, such as for pillows, vests, purses or business card holders. 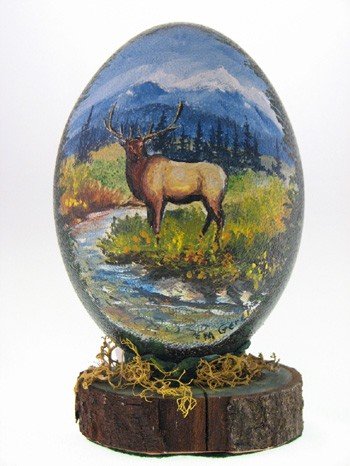 The eggs, which are beautiful textured forest green with a turquoise underlayer which often shows through, can be etched or intricately carved, or painted upon. Faberge jewelry boxes, made from Emu eggs, and covered with valuable gems, sell for thousands of dollars. There is virtually no end to the variety of products that could be produced from these generous creatures.

Emu Ranches
On American farms, emus are raised on feed formulated to optimize growth and in spacious pens providing ample room to grow. Adult emus stand at 5 to 5 1/2 feet, but can stretch to 7 feet in height, and weigh 110 to 130 pounds.  Remember the old adage, ‘good fences make good neighbors’?  Because emus can easily jump over a 5′ fence, we provide 6′ fences for all of our pens.The American emu farmer is committed to sound farming practices, bringing the consumer quality products to enhance their lives.