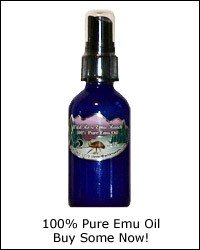 What does 100% Pure Emu Oil do for those who have Vulvodynia?
100% Pure Emu Oil helps relieve painful symptoms by its soothing, anti-inflammatory and pain-relieving properties. Topical application of Emu Oil, along with other key treatments recommended by Dr Solomons and the Vulvar Pain Foundation (such as the low-oxalate diet and timed-release Calcium citrate) have resulted in a great degree of success in alleviating the intense pain associated with Vulvodynia.

Since 2001, I have been contacted by over 1200 members of the VP Foundation, or women referred with similar symptoms. Most have reported significant benefits from the use of Emu Oil.

What is 100% Pure Emu Oil?
100% Pure Emu Oil consists of seven fatty acids, including the Omega-3 (linolenic) fatty acid and the Omega-6 (linoleic) fatty acid, in amounts relatively similar to those required by human skin cells.
Omega-3 and Omega-6 fatty acids are known to have an anti-inflammatory effect on damaged tissue, with some natural pain-relieving and anti-itching properties.

Emu Oil is a light oil, penetrating almost immediately to the basal cell layer where new skin cells are formed. It tightens the new cell membrane and nourishes the cells. If used consistently over a period of time (e.g. 4-6 weeks), as this layer surfaces to become the outer layer of skin, it facilitates thickening of the skin with more resistance to drying, thinning, chafing, cracking and line formation. In studies of skin that had thinned in the elderly, the use of 100% Pure Emu Oil resulted in the skin becoming 2x-4x thicker in one study and 14% thicker in the second study. Thicker skin (more layers of skin cells) allows more protection with subsequently less damage.

How do I use 100% Pure Emu Oil?
As with any over-the-counter cream or lotion, when diagnosed with Vulvodynia, consult your doctor before trying a new product. Emu Oil is a very small molecule which spreads readily on the skin and absorbs quickly; therefore, only a very small amount is necessary for each application. It is practical to apply the oil once in the morning and once in the evening, but 100% Pure Emu Oil can be applied as often as is convenient and necessary for relief.

What about taking Emu Oil as a Gel-Capsule?
Many women take 100% Pure Emu Oil internally, as a Gel-Capsule, for various health problems. While no official clinical studies have been performed using Emu Oil, anecdotal reports have been favorable for improved energy, mental outlook, digestion, and healthier skin, hair and nails.

In what other ways has 100% Pure Emu Oil been helpful?
Doctors are increasingly prescribing Estrogen compounded in a base of 100% Pure Emu Oil, due to the negative side effects from some components of the more traditional Estrogen creams (e.g. Estrace). Contact me to see if I have the name of a Pharmacy near you which compounds Estrogen into 100% Pure Emu Oil.  More and more pharmacies are compounding products, but they are (understandably) leery of using a product with which they are unfamiliar.  I would be happy to supply your pharmacy with Emu Oil MSDS, analytical analysis, and information as to the care taken to produce our Emu Oil.